TOP 30: UZBEK CUISINE. WHAT TO TRY IN UZBEKISTAN?

It’s difficult to separate classic Uzbekistan tours from gastronomic tourism. The cuisine in Uzbekistan is so closely intertwined with customs and traditions that you understand — it is pointless to tell, it is worth trying!

Our Uzbekistan tours are built around the degustation and master-classes of Uzbek cuisine headliners:

In the first part of the Top 30 Uzbek cuisine, we will take a closer look at the “FAB — 10”. Next — with Uzbek dishes suitable for vegetarians and special treats that are cooked for the holidays.

There are no doubts, the main national dish of Uzbekistan — plov. We immediately answer the question: where is the best place in Uzbekistan to try pilaf? Answer: everywhere. There are 200 varieties of pilaf-you will be surprised by the difference in ingredients and technology, appearance, and of course, the uniqueness of the taste of plov in Tashkent, Samarkand, or Bukhara. Every Central Asian country considers pilaf as their own, but the “Uzbek” version is included in the list of UNESCO heritage! Plov in Uzbekistan is not only a favorite dish, it is a part of the culture, ritual, and social life. With pilaf, Uzbek people celebrate the birth of children, circumcision, and weddings, called “toi” ... It is customary in Uzbekistan to invite people to plov even for solving business issues. Just keep in mind a centuries-old custom has defined Thursday as all-Uzbek pilaf day)) Therefore, if you plan a tasting on this day of the week, come to Oshhona as early as possible. 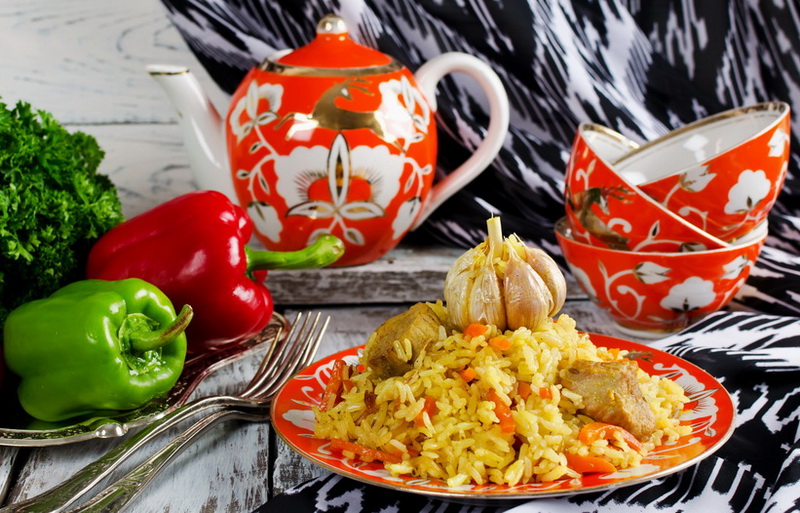 Kazan-kebab in Uzbekistan is considered a “male” dish, due to the basic ingredients — meat-and-potato, which gives a feeling of satiety. Kazan-kebab is presented in the menu of every choyhona, but, as in the case of pilaf, it is believed that every Uzbek should be able to cook it by itself. The recipe is simple — meat (lamb, veal, or even chicken) is pre-salted for two hours. Excellent suitable in Kazan-kebab meat on the bone or ribs. Separately, getting fried potatoes to be crisp and golden. Potatoes are added to the meat stewed in a cauldron, salted, seasoned with spices, and simmered. You will get the more delicate texture and expressive taste the more time the ingredients spend in the cauldron. 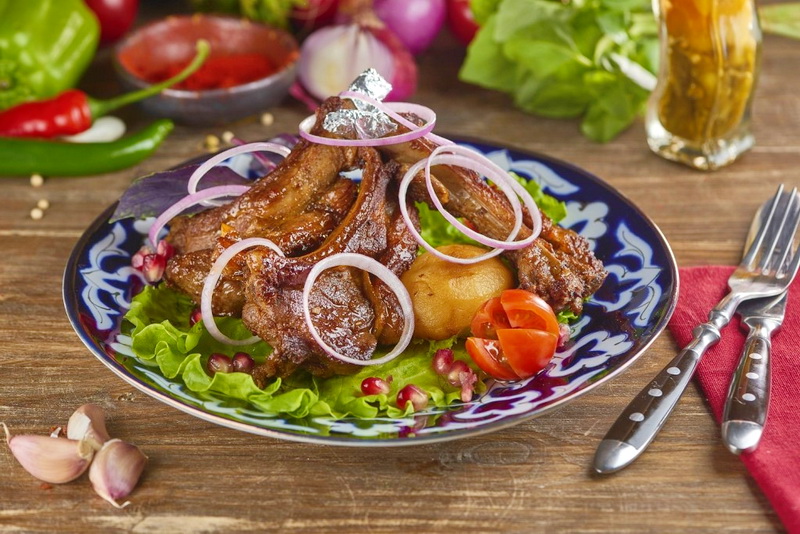 The cooking technology of the next popular dish in Uzbekistan resembles dumplings from the Russian tradition, although its roots go back to China, where they are called “baozi”, and it came to Central Asia together with the Xinjiang people. Despite the composition of the elementary ingredients: dough flour, water, eggs, and salt, it does not lend itself to everyone. At the gastronomic masterclasses, our tourists are fascinated by the cook’s manipulations, who make a dough as thin as a spider's web — and it surprisingly does not break, despite the huge amount of juicy meat filling. Unlike other national dishes, manti are prepared without the use of oil and roasting, so it is suitable for people with dietary restrictions. Traditionally, manti are prepared with sliced lamb or beef, but in Uzbekistan, options with pumpkin or potatoes are also common. So dispelled the myth that the cuisine of Uzbekistan is not suitable for vegetarians — take this dish to note. 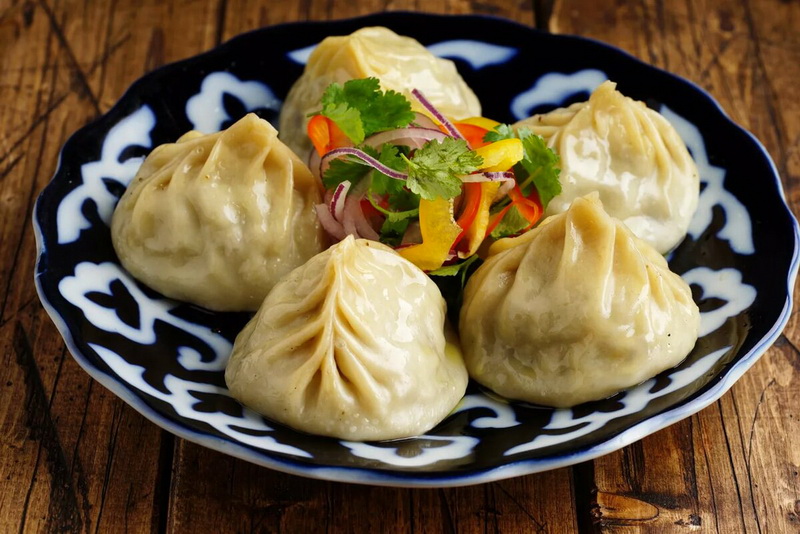 If you were wondering what fast food looks like in Uzbek, meet Samsa. Despite the popularity of pastries in the country, such as “gumma”, Tatar belyash and cheburek, shawarma, and lavash, none of them can compare in popularity with a samosa in Uzbekistan, and here's why:

“Jizzakh” Samsa, originally from the same name city, located on the way to Samarkand from Tashkent has become an independent gastronomic brand in Uzbekistan. Fragrant tandoori (from Uzbek mud sealed oven) samosa, full of juicy meat is incredibly appetizing and delicious. If you will see queues in Uzbekistan at lunch, with a 99% probability here prepare excellent tandoori Samsa. 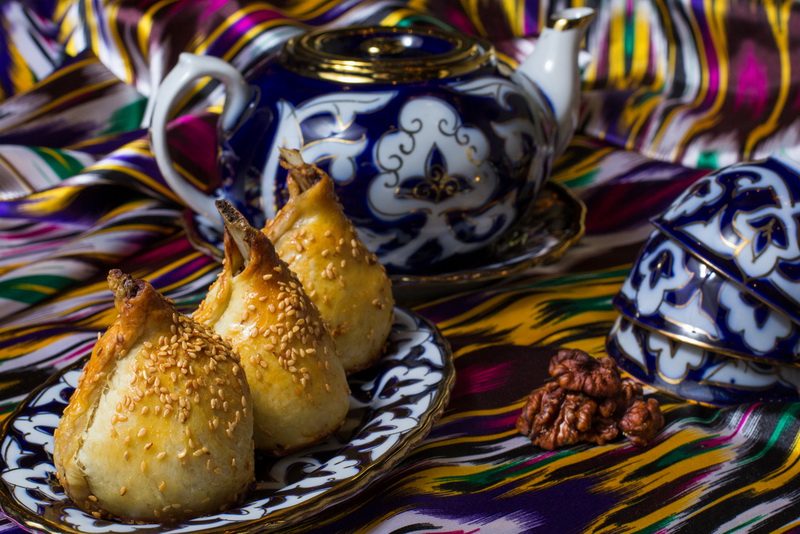 The best Uzbek Lagman is considered the one prepared manually from the first to the last ingredient. The most time-consuming part is cooking noodles for soup, but the result justifies the effort. To lamb or beef, meat is added bell pepper, garlic, onion, and fresh herbs — so, the noodles are cooked in a great sauce formed during the steaming of meat with vegetables, but this is the basic recipe. This is the Great Silk Road spaghetti, isn't it?))

Lagman, as well as pilaf, differs in cooking features depending on the region:

To prepare kovurma-Lagman, noodles are fried in a pan with pepper, onion, and tomato paste. Indeed, resembling spaghetti! An unexpected detail—the serving decoration of the Lagman is a sunny-side-up egg. It is definitely worth trying both options and determines the favorite on your own.

If a tour to Khiva is planned, don't miss the exotic Khorezm Lagman “Shivit-Osh”. “Shivit” is translated as fennel, which is infused with water for the dough, and in a shredded form is included in the noodles. Also, to the stew of meat and vegetables added a milk sauce — this all prepared in parallel. Khorezm Lagman is known as “green noodles” and is unlike any regional variety. Shivit osh is a bright exclusive that deserves to be presented in the collection of your Uzbekistan gastronomic impressions. But what unites the regional varieties of Lagman, in addition to noodles and meat is a lush spice bouquet. The bazaars sell a ready-made, hand-picked set for the dish — spice up your life! 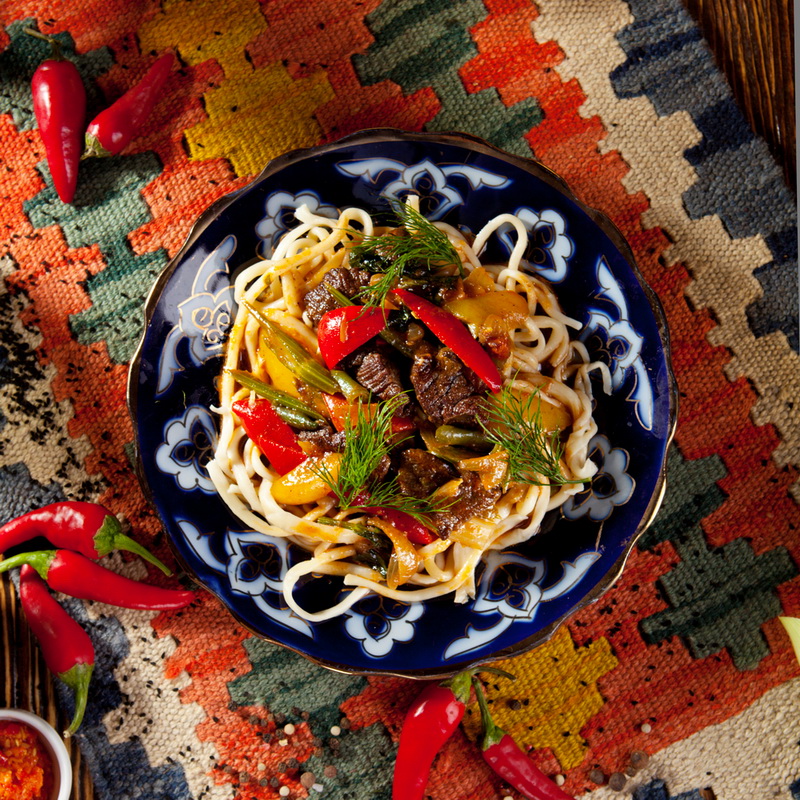 Shashlik is an adored Central Asian dish. Strolling down the cozy streets of the Uzbekistan cities, a tantalizing aroma comes from everywhere. Masters of meat science for preparing shashlik to pick up even the special wood from fruit trees, because in such a delicate art, every detail is important. Lamb and beef are also used, and delicious pieces of meat are interspersed with patches of fat for juiciness. There is also an exotic shish kebab made from quail, called “bedona” in Uzbek. Even in the most modest “milliy taomlari” cafes, there are a dozen varieties of shashlik — Gijduvan, Caucasian, with liver, fish, and chicken fillet. There are 99 of them you can meet in the cheap and popular Samarkand cafe! Vegetables mixed grill, cooked on the coals — tomatoes and eggplants, zucchini, sweet peppers, and mushrooms are incredibly delicious. Vegetables can be used as a garnish, and as a main course that will appeal to vegetarians. Shish kabob is served with pickled vinegar, onion, and red pepper — perfectly combined as a match made in heaven... Yum! 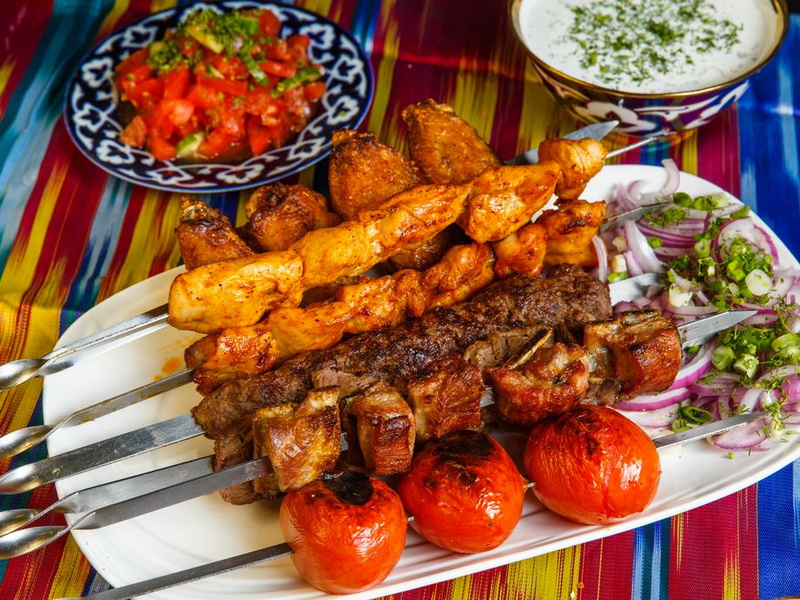 Shurpa is a rich meat Uzbek soup prepared on the fire, in a cauldron, mainly from lamb fillets. Add generous slices of potatoes and carrots, onions, and garlic. Shurpa is seasoned with fresh, garden maiden fennel, coriander, and parsley — the smell is indescribable! It is prepared on a slow fire — the way to preserve the broth transparency and extract maximum nutrients from the meat. Abu Ali al-Husayn ibn Sino, known in Europe as Avicenna, told about the amazing healing properties of shurpa and considered this Uzbek soup as a cure for ailments associated with reduced immunity (that times shurpa was prepared without potatoes). Shurpa is recommended for use by weakened people after an illness when it is necessary to increase the tone of vital forces – this is the first and pleasant remedy for colds. Shurpa in Uzbekistan is a popular first-course choice. For healthier cold weather, the soup saturates and warms, but in hot summer it is beloved. 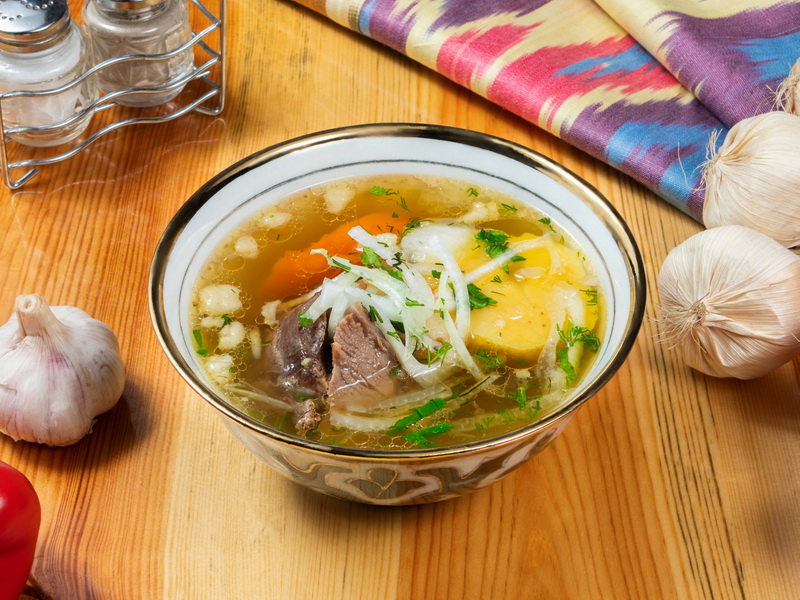 Dymlyama in Uzbekistan is another fantastic variation on the theme of vegetable stew with meat. The name in the Turkic languages means “the process of languishing”. It is prepared in a cauldron or pots, with lamb-beef meat, and vegetables without the slightest flaws: combining potatoes, onions, carrots, cabbage, pepper, and garlic. The cooking technology is very important here— vegetables are added in layers because the order of the layout affects the taste and impregnation of juices. Meat is traditionally laid at the bottom of the cauldron. Dymlyama is cooked on a slow-burning fire for several hours. A set of dymlyama spices is also selected by the cook itself, but following an unspoken rule, mutton meat should be seasoned with black pepper, which reveals and enhances the brightness of the taste. When collecting a set of spices by hand, you can add your personal touch to a dymlyama, but do not forget to buy cumin, which adds piquancy. 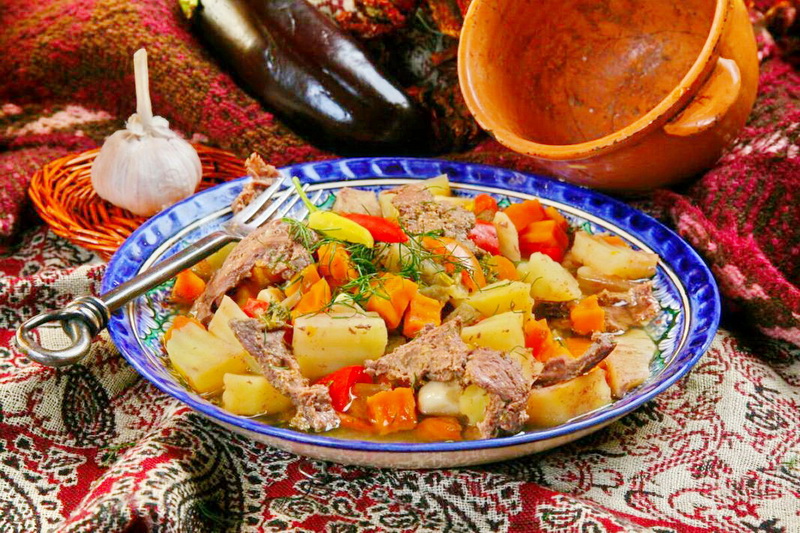 Mashhurda is a traditional Uzbek soup, which came here together with the native Uyghur culture. Due to climatic conditions, most plants take root well in the five Central Asian countries and China. This also applies to the main ingredient — mung bean, an overlooked representative of the legume family. In the duet goes rice, and of course here are vegetables including the following — onions and carrots, potatoes or turnips, Bulgarian peppers, peeled tomatoes, and garlic. Beef and lamb meat are equally well suited to the mung bean. It is prepared in a cauldron, over live charcoal with oil. Hot pepper is pre-fried, and then the meat itself is fried in already spicy oil, and only then added onions and other vegetables combine with Zira spice and paprika. Frying hot pepper in oil brings out entirely different flavors– already at the start cooking stage, the stomach begins to excite a fantastic smell that resembles a barbecue. Served with greens and sour cream. Mashhurda soup is a popular choice for the first course in autumn and winter due to its as well as its high nutritional value and warming content. If you add ginger to it, there will be no trace of cold chills — the natural remedy. 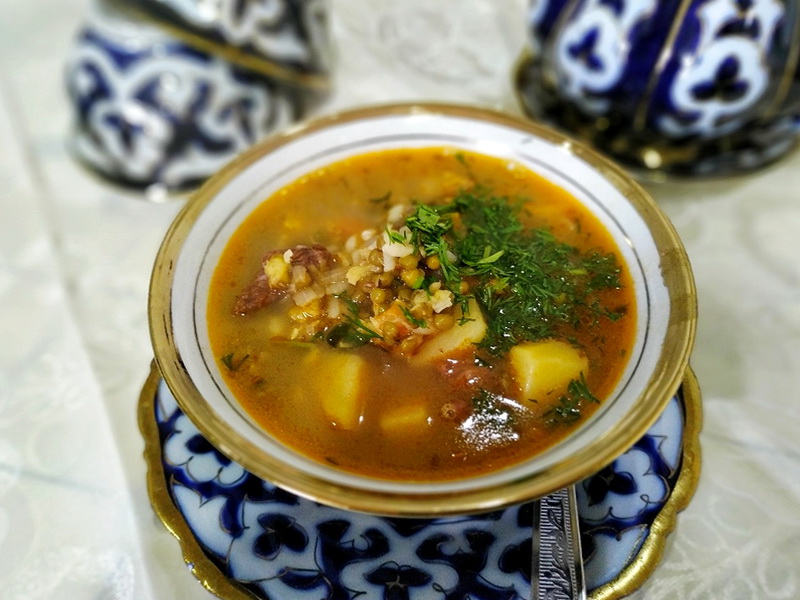 Naryn is another popular Central Asian dish. It is cooked based on hand-pulled noodles, just like in Lagman. But if you expect to see lamb-and-beef like in other Uzbek dishes, you will meet surprise — for authentic Naryn used only horsemeat. Cooking takes more than one hour and requires a lot of patience, so, just like a pilaf, Naryn is usually prepared by a family or a group of friends. So the process goes faster, and the time seems to move so much pleasure. Only a rub of meat with spices — basically it is salt, cumin, and black pepper, takes 5-6 hours, and it is recommended to mix it every 60 minutes. The Naryn dough requires rising time — usually an hour, and then it is boiled with the constant attention of the cook and mixing- so it does not stick. Cooking Naryn resembles an exciting team-building with taste. Even chefs can hardly do it with one pair of hands, so it is a reasonable choice for ordering in a restaurant. 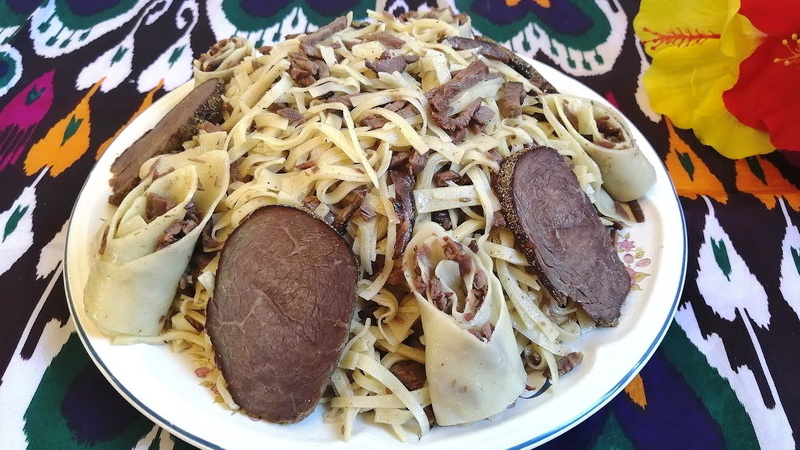