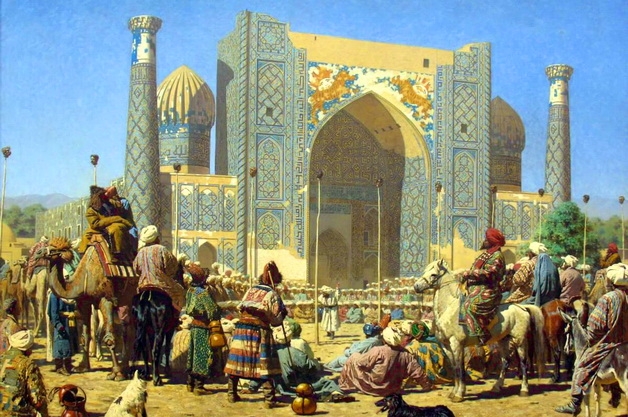 Central Asia is one of the most ancient regions inhabited by one of the oldest centers of human cultures, as attested by numerous relics.

The territory of present-day Uzbekistan was the crossroads of Eurasia and a branch of the ancient Great Silk Road. It connected Europe and China, passed through the oasis settlements of Kokand, Samarkand, and Bukhara. Samarkand's history is one of the most ancient in the world. In the Samarkand region, archeologists have discovered an area where primitive men lived more than 10,000 years ago. In the South of Uzbekistan, a skeleton of the ancient man and some remarkable rock drawings were discovered. Traces of primitive men have also been found near Tashkent, in Khoresm, and in the Kara-Kalpak region. The historical culture of Central Asia is very rich. In antiquity, the peoples of Central Asia maintained trade and cultural relations with the peoples of China, India, Iran, the Arab countries, the Mediterranean area, Eastern Europe, the Caucasus, and Siberia.

THE PERIOD OF BLOSSOM AND COLLAPSE IN THE HISTORY OF UZBEKISTAN

From 800 B.C. Central Asia witnessed the rise and fall of the various ancient states including Bactria, Sogdiana, and Khorezm, the state of the Achaemenids, Alexander the Great, (Selivkids) Greco-Bactrian, Parthian, and Kushan Kingdoms. The Periods of economic upsurge experienced by the people living on the territory of present-day Uzbekistan alternated with periods of great economic oppression and deprivation connected with the history of wars and conquests that destroyed whole towns and villages. Foreign invasions brought untold destruction. In the 6thcentury B.C. Central Asia was conquered by Cyrus, founder of the Persian Empire. In 330 B.C. the Persian Empire was destroyed by Alexander the Great. The Greco-Bactrian state came into existence, which incorporated the greater part of present-day Uzbekistan. The Kushan kingdom existed in the 1st – 4thcenturies A.D. In subsequent centuries Central Asia was the scene of struggle of many nomadic Turkic tribes that invaded it from the North.

ALEXANDER THE GREAT IN THE HISTORY OF UZBEKISTAN

Alexander the Great was the first world conqueror and one of the most remarkable men in history. The son of Philip Macedon, tsar, an excellent general and organizer Alexander brought Greek ideas and the Greek way of doing things to all the countries that he conquered. He was born in 356 and died in 323 B.C.

His mother, Olimpias, princess of Epirus, was brilliant and hot-tempered. Alexander inherited the best qualities of both his parents. Alexander the Great was an ambitious emperor. He decided to conquer Persia. This had been part of his father’s plan. In the spring of 336 B.C., he crossed the Hellespont (Dardanelles) with an army. His army won a victory over the Persians on the bank of the Gracious River.

This victory opened the road to Asia Minor. Before the summer of 327, he had once more crossed the Hindu-Kush Mountains on this way to India. It was the beginning of the crash of Alexander’s Army. Alexander left some of his soldiers in Middle Asia and because of this as the legend says some Uzbek people appeared with green eyes and blond hair. Greek roots are still present in Uzbek culture.

The Turkic Kaganate, a huge Turkic state appeared in 500-600 A.D. as a result of the union of diverse nomadic tribes and peoples of the Altai. During the 6thcentury the tribes extended their rule over the territory of Central Asia. It was a period of the assimilation of various ethnic groups of the kaganate and various local cultures and the formation of large and small alliances of tribes with related languages and dialects. The Kaganate played a great role in uniting and consolidating nomadic speaking Turkish, which roamed and settled down in the Central Asian steppes and oases.

ARABS AND ISLAM IN THE HISTORY OF UZBEKISTAN

At the end of the 7thcentury and the beginning of the 8thcentury, the Arab conquerors under Emir KotaibeIbn Muslim conquered Khorezm (Khiva) and Sogdiana (Samarkand, Bukhara). Under the Abbasid caliphs of Baghdad, the Arabian influence became dominant in the oasis cities of Central Asia. About 874 the country was conquered by the Samanid dynasty from Balkh. In 999 a Turkic Karakhanid dynasty, the first to embrace Islam, supplanted the Samanids in Samarkand and Bukhara. The new rulers even pushed down south of the Amu Darya, but they were stopped by Makhmud of Ghazni and then that river became the dividing line between Iran and Turan.

Ismail Samanid is the representative of the Eastern dynasty that ruled in 819-999 over the vast territory of Mavara-Un-Nahr (the Arabic name of the territory between the Amu-Darya and Syr-Darya rivers in Central Asia since the 7th century A.D). Ismail Samanid reigned from 892 till 907. It was the person who erected this marvelous Mausoleum in Noble Bukhara over his father’s grave. This has been testified by the archeological excavations held in 1926-1928. It has been established that there were several graves inside the Mausoleum, and the grave of Ismail himself was situated aside at the entrance. Next to him his son and grandson were buried.

GENGHIS KHAN IN THE HISTORY OF UZBEKISTAN

The collapse of the Arab Caliphate led to the resurrection of the independent statehoods in Central Asia. Between the 9thand 15thcenturies, a succession of the large independent feudal states was replaced in Central Asia: the monarchies of Samanids, Seljuks, Khorezmshah, and Timurlane (or Tamerlane) Empire. The rule of the Samanids was marked by a great upsurge in the economy and culture in Khorasan and Mavara-Un-Nahr. Under Khorezmshahs the country’s economy, science, and culture continued to develop. The conquest of Central Asia by Makhmud of Ghazm in the 10thcentury, by the Karakhanids at the end of the 10th– beginning of the 11thcenturies and by Genghis Khan at the beginning of the 13thcentury brought sufferings to the territory of Central Asia. Many towns were reduced; thousands of peasants and craftsmen were either killed or driven into slavery. But these rulers established huge, centralized states during these periods.

AMIR TIMUR IN THE HISTORY OF UZBEKISTAN, THE RULER OF MAVARA-UN-NAHR

Timur (Timurlane or Tamerlane) was born in the village of Khodja-Ilgar, near Shahrisabs. He was the son of Emir Taragay, who was from the Barlos tribes. Since his teenage hoodTimur knew much about military training and took part in civil wars. He was promoted in the period of invasion to Mavar-Un-Nahr, Mugilistan Khan Tuglug-Timur, who twice – in 1360 and 1361 – tried to subordinate this rich country and reached Kesh.

After the death of Tuglug-Timur his son was outed from Mavara-Un-Nahr, and Turkish emir Kozagon’s grandson Husein helped him. They became relatives because Timur was married to his sister Uljoi-Turhon. In 1370, Timur invaded Balkh, Husein was killed by Huttlan’s ruler Kaihosrav, and he was the ally of Timur. In the second half of the 14th century the conqueror Timur, having firmly established himself as an absolute ruler had chosen Samarkand as his capital city, started campaigns against other states. A prominent military commander and outstanding but firm and resolute statesman Timur became the ruler of Mavara-Un-Nahr in 1370. His rule and the rule of his descendants – Sharhruh, Ulugbek, and Bobur were marked by the growth of productive forces, the development of irrigation, arts and crafts, trade, and flourishing of the literature, science, and art of ancient Samarkand and Mavara-Un-Nahr.

Ulugbek (Muhammad Taragai) was born in 1394 in Sultania. His father was great Timur’s son Shahrukh, his mother was Gavharshodbegim, the granddaughter of the Naiman’spadishahKutlugkhan. His grandmother Saraimulkhanum brought up Ulugbek. When he was 15 years old he became the ruler of Samarkand. When he was 17, he became the ruler of Mavara-Un-Nahr, and he ruled the state for 40 years. Really it was very difficult for him to combine state affairs with science and Ulugbek realized it only after his defeat by Barakhan. The great scientist liked to devote himself to science, but he needed the throne too: if he were not a sultan emir how could he build the expensive observatory, erect madrasahs, pay hundreds of scientists for their work. Ulugbek’s mother Gavharshodbegim didn’t want her son to be a scientist and she said that the world was not governed by science, by books, but only by power. Her son Ulugbek became a great scientist, he tried to send human ideas to the stars and to get new knowledge from so long distance. He compiled the catalog of stars, which is very popular even today. When Ulugbek was the ruler of Samarkand, it became the center of art and science. Mavara-Un-Nahr became powerful and strong. But a lot of his emirs didn’t support his policy and they tried to plunder the state treasure, to begin the war between cousins and between the father and the son. Historians of Ulugbek’s time wrote that Ulugbek had been beheaded by his own son’s decree at a spot some ten or twelve miles from Samarkand.

Bobur, Zahir-Iddin (1483-1530) founder of the great Mogul dynasty in India, was a Barlos Turk descended on the male side from Timur and on the female side from Chagatai Khan (son of Genghis Khan, the great Mongol scourge of Asia). In 1494 at the age of eleven, he succeeded his father, Sultan Mirza, as a ruler of the small state of Fergana. From 1494 to 1504 he vainly endeavored to maintain his position in Fergana, but he was expelled by more powerful neighbors and eventually sought refuge in the mountain fortresses of Kabul, which became his headquarters until 1525. Political conditions in India contributed to the success of his plans. Bobur’s defeats and victories are recorded in his frank and intimate memoirs (the Bobur-Noma). Bobur recorded in his famous memoirs that his chief ambition was to recover the vast territories, which had once formed part of Timur’s mighty Empire. At his death in 1530 he controlled the greater part of Northern India. But, as was mentioned above, Bobur is famous not only as of the founder of the mogul dynasty and the general; he was a prominent poet of 15th-16thcenturies, the creator of Bobur-Noma, historical work of world importance. His memoirs are of great influence on our knowledge about India of those days. Bobur portrayed as well as vivid pictures of the nature and population of Fergana and Zeravshan valleys. Bobur’s creative work and state activity played a very important role in the unification of the cultures of Central Asia, Iran, Afghanistan, and India.