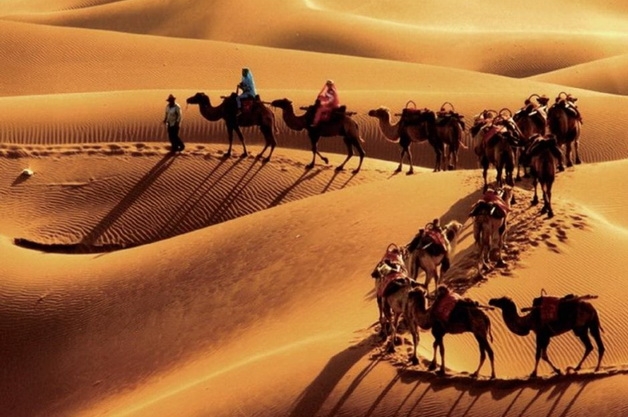 A remarkable feature of the past and what is now known as the Great Silk Road is one of the greatest achievements of the ancient Orient. The Great Silk Road is a monument to human inquisitiveness, entrepreneurship, and an unquenchable thirst for ever new knowledge and a desire to go beyond. Human civilization does not know any other road as famous as this trans-Eurasian system of routes linking together China and Western Europe.  It was, in fact, a channel through which the unprecedented number of nations exchanged their wares, cultural and artistic achievements, and most revolutionary ideas.

Historically China and its man, Zhang Qianis is known to have been trailblazers who were able to assemble the numerous trade routes there into a single whole. Before, these caravan roads had functioned as a system of separate links, and any trader had to face many perils and more than once pay for their wares and even life en route. That was China’s first diplomatic mission destined to Central Asia. Zhang Quian clearly saw all the advantages of the route, and upon return, this was immediately reported to his master, the Chinese emperor.

The beginning of the Silk Road history coincides with the end of the II century B.C. For more than 15 centuries since then this caravan road system had been in the service of people, and this is an overall record for any overland road. The great civilizations of China, Hindu Valley, the Middle East, and Europe had lived through their ups and downs, wars to set control over the strategic stretches of this system or been pushed away from the mainstream. A glimpse of the map of the Great Silk Road immediately suggests that it’s like a huge river taking in smaller streams and rivulets, and flowing around obstacles. The obstacles were numerous and many in the Great Silk Roads. In the 550s, the Sogdians made two attempts to reach Byzantium and failed because of the Iranian shahs. The first time they burned down the silks of Soghdian traders, and the second, they poisoned the Soghdian envoys. However, this didn’t stop the Sogdians and they found another way – along the northern shores of the Caspian they reached Byzantium and established diplomatic and trade relations. Time went on, and the roads became more ramified and comfortable for travel. The road had been acquiring caravanserais, or inns, warehouses, money changing, safety measures to protect foreign guests. The Great Silk Road was in need of many professions – cameleers, guardsmen, interpreters, moneychangers. Following the Templars, Oriental traders introduced the circulation of paper receipts. Leaving Khorassan for Soghd, for instance, one could give his gold coins to an Iranian moneychanger and receive a note which could then be exchanged for real money at Soghd.

The vastness of the Great Silk Road could not understandably be controlled by a single nation, and the resultant wars only damaged trade along the Road.  However, the Great Silk Road has proved its viability and outlived feudal strife, the fall of statehoods, the plunder of cities, and caravans, and the end of dynasties.  Risks and profits were high. And what one could buy for almost nothing at one end of the Great Silk Road became real gold at its end.

The Chinese had enriched their culture by adopting Central Asian horses known for their beauty and endurance, and such plants as alfalfa, chestnut, vine, pomegranate, etc. that proved to be very effective there.  It is from Central Asia that China had adopted cotton growing, while the Sogdians took over from the Chinese such arts and crafts as silk-making and gold and silver jewelry, paper making and weaponry. Remarkably, the Europeans were unable to offer similarly lucrative wares in exchange and had to pay in gold and silver. This resulted in the amassing of huge treasures in the Orient, which fact could not help concerning the European rulers.

Genghis Khan was the first to stretch his rule over the Great Silk Road in the XIII-XIV centuries, and these were the years of flourishing trade and prosperity. But thereafter trade was again damaged by feudal strife that ended in that the Great Silk Road was divided between the four owners:  China, Central Asia, Iran, and the Golden Horde, who was trying to provide security for everybody on the Great Silk Road – no matter which faith or nationality they belonged to.

The Great Silk Road required almost a year to travel from end to end, and merchants started using maritime ways as a shorter and less risky means of communication. Moreover, one ship was capable of taking aboard as much as a big caravan. Therefore, by the XVI century, only local hinterland caravan roads between China and Central Asia had survived.

We owe a great deal to the Great Silk Road. The Road has contributed to the emergence and development of many institutions, including international trade, distribution of labor, international banking, protection of property, and the rights of consumers. Moreover, the Great Silk Road has encouraged cultural development by exchanging technologies, ideas, and the arts. Silk has liberated the well-to-do Europeans from flees, whereas Chinese and Central Asian paper has made book printing more affordable. But what is more important, the nations have learned about each other and of each other’s religions and ways of life.

«Silk Roads: Roads of Dialog» is a UNESCO program seeking to preserve the cultural and historic legacy and, hopefully, resuscitate the Great Silk Road as a historic monument and a trans-national thoroughfare, in all its functions and meanings.