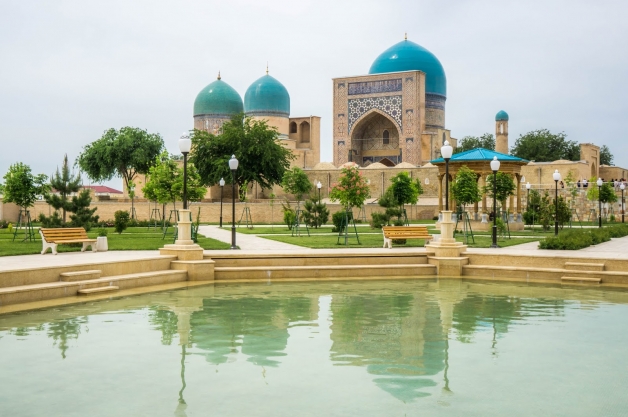 One of the marvelous cities in Uzbekistan is sited 80 kilometers south of Samarkand, behind the high Davenport Karachi mountain pass. This city is called Shakhrisabz. No matter what period of the year you decide to visit this ancient city, it appears to travelers as a huge green garden. And if you come in the evening, Shahrisabz will be glowing with all its street lights.

A Small Town with a Big History

It is known that in the 3rd century BC, the agricultural settlements were situated in the city’s area. Further evidence states that in the 2nd century BC, the city of Sousse existed there. Its ruler was the pioneer in the field of establishing trade bonds with China. Then he built a renewed town where the old one was and named it Keshe. During the Achaemenid ruling, the city was renamed Kesh and started serving as the center of the Sughd Region.

The city was frequently moved and rebuilt, so it is not surprising that modern Shakhrisabz and the antique city of Kesh are 20 kilometers away from each other.

Shakhrisabz suffered and survived many conquests, from the capture by the Achaemenid Empire and Alexander the Great to the Arabs. Despite this, the town has always been referred to as the intersection of caravan pathways on the Silk Road.

Shakhrisabz is also popular because the great Amir Timur was born here. He never forgot his homeland, and in fact, after the creation of a powerful state Transoxiana, the city had the same importance as the capital. The governor made the city his residence and built the famous Ak-Saray there. Thanks to the skills of architects and artists who had come there on the order of the ruler, Shakhrisabz now has true architectural masterpieces.

The town’s historical part is one of those proud representatives of the sites from the UNESCO World Heritage list. That’s, perhaps, one of the reasons why pictures of Shakhrisabz capture every tourist’s eye.

The most visited and famous attraction of Shakhrisabz is Timur’s Ak-Saray palace, which is translated as the White Palace. It was greatly damaged but is being in the process of restoration now, and the rebuilding goes rapidly. In addition to the giant 40-meter gates, you can observe the sumptuous filigree mosaic and unique in their technology examples of masonry walls, by which you can judge how splendid this huge summer residence probably was.

The Dorus-Siadat mausoleum isn’t less interesting. It’s the crypt of Timur’s sons Jahangir and Omar, which is comparable to the Ak-Saray by its size and design.

The iconic place in the town is also the Dorut-Tilyavat ensemble, which is divided into the mausoleum of Timur’s spiritual mentor whose name was Shamsiddin Kulol, the glorious mausoleum Gumbazi-Seyidon, the Kok-Gumbaz mosque, the Hazrat-Imam mosque, and the cenotaph of Timur (actually, he is buried in Samarkand, but the mausoleums of his relatives are in Shakhrisabz).

The covered market Chorsu is a brick five-domed building sited in the center of Shakhrisabz. It is a traditional nationally styled covered market, which was constructed at the crossing of two major streets of the old town. Shakhrisabz is the third city in Uzbekistan, in which such a construction still remains. This cross-shaped building used to house numerous stalls and shops.

The city bathhouse is one of the most antique architectural monuments there. It was constructed in the XV century and operates even nowadays. The sauna is heated with the whole network of canals laid under the floor. The whole building is built of durable burnt brick, and the floors are made of precious marble.

The Kok-Gumbaz mosque is another unique place worth visiting. The domed top of the mosque stands majestically above the people’s heads. You can see the remains of multiple sacred inscriptions, which were written on the inside of the dome. Thorough studies of this complex revealed that each type of sacred inscriptions refers to a particular cultural epoch.

Shakhrisabz is known for its extraordinary embroidery called “iroki”. It’s a colorful style, which portrays sunlight, flowers, dragons, pomegranates, and other lush ornaments. They all look organic on the traditional skullcaps, but talented artists transfer them onto pillows, purses, and even shoes, making this art even more unique.

The most popular embroidered products you can see on the market are:

Such products are acquired not only by the guests of the city but also by the locals. Nowadays, the craft of handmade embroidery is on the rise again thanks to the initiative of the President and the increased demand for handicrafts. A growing number of young people become attracted to this ancient art, preserving the traditions of their predecessors and introducing fresh ideas and trends.

This region is dominated by a continental climate, with fairly warm winters and hot summers. From December to February, the temperature here is from +3 up to + 8 degrees Celsius on average, sometimes falling to zero. The hottest month is July when the thermometer regularly surpasses 30 degrees Celsius. Snow falls rarely, and it usually rains in very moderate amounts, mostly in the spring and late autumn.

Shakhrisabz Is Waiting for You

The medieval author Makhmud ibn Vali once wrote: “This city is believed to be one of the most marvelous places on the planet, with a very good and attractive climate. Its open spaces and fields are very beautiful indeed.” One can only agree with the author. Especially because these days Shakhrisabz justifies its name – the Green City.

Shakhrisabz embodies the culture and traditions of the Uzbek people, impressing visitors with its color, unique ancient monuments, the abundance of greenery, and typical of these places oriental hospitality. A visit to this beautiful small town will allow you to see Uzbekistan in its best light and get tons of positive emotions.