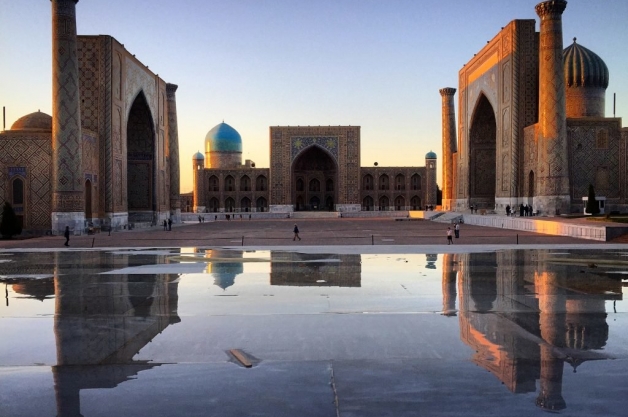 Regardless of what type of vacation you are planning and with whom, Samarkand Uzbekistan can be a wonderful destination for anyone. During the city’s almost-three-thousand-year existence, it has always been the crossroads of civilizations, cultures, and peoples.

Being commonly known in different parts of the planet as a fantastic place with a unique oriental flavor that enriches Uzbekistan history, this city is both ancient and at the same time forever young.

Marks of the Ancient Times

Samarkand, being kind of an old greybeard among other cities of the world, embodies the stories of countries and nations and shows how time influences generations of people. Just like the locations of the first civilizations – Rome, Athens, Babylon, Alexandria, Byzantium, and Memphis – Samarkand’s fate was to go through dangerous periods in history that would test its strength and the vigor of its citizens.

The city, with its beautiful blue domes, that charm millions of tourists, has a rich history that is thousands of years long. Analysis of the archaeological findings indicates that people first appeared in the city several millennia BC.

Samarkand has a great geographical position. Favorable climate, sufficient rainfall, proximity to mountains with a variety of animals to hunt – all of it created a convenient environment for settling on that territory.

The stone walls and towers surrounding the temples and palaces of Samarkand rulers appeared there a few centuries before our era. The first mentions of Samarkand (alternatively Samarcand or Samarqand) have been found in historical chronicles that date back to Alexander the Great and his conquests: Maracanda is how they called the city in 329 BC.

At that time, it was a densely populated city with a highly developed culture, trade, and crafts. A ten-kilometer (six miles) long defensive wall and a mighty fortress were built to protect the city from potential invaders.

Today, it is widely known that Samarkand has founded around the 6th-4th centuries BC. Archeological researches prove that it was developing really fast even back to those days. Throughout history, the old streets of a dusty city had to withstand the Greek-Macedonian troops, cruel Kara Khitai hordes, and Genghis Khan. The city also had to survive destructive invasions of the Arabs who, by the way, were the ones to bring a new religion called Islam.

Amir Timur, more widely known as Tamerlane, is a famous conqueror of a Turco-Mongol origin. In 1370, supported by the noble class, Timur succeeded in defeating his predecessor Hussain. As soon as he took over the power in the city, he proclaimed himself the ruler of the Timurid Empire, and Samarkand was announced to be its capital.

Waging wars for 35 years, Timur had managed to establish a glorious empire, which was stretching from the Volga River to the Ganges, from the Tien Shan to the Bosporus. The richest countries of the East became subdued by him. In 1397-1398 years, Tamerlane invaded the northern part of India. Then, it was the time for Georgia, the Caucasus, and Syria. In 1400, Timur started the war with the Turkish and Egyptian sultans, which ended successfully too.

Timur and his son Miran Shah held diplomatic correspondence with the rulers of the West European nations. In particular, they exchanged letters with Genoa, Venice, Turkey, Byzantium, Spain, France, and England. Thousands of skilled craftsmen were forced to move from conquered countries to Samarkand, where they were supposed to help with transforming it into a big and glorious city. Tamerlane’s plan for his capital was to make it surpass all the other world’s capitals in every possible way. When you visit Samarkand, you will be able to observe some of his constructions:

• the Gur-a-Amir tomb mausoleum and other magnificent monuments.

Samarkand had been the capital of the Timurid Empire for 35 years. After Tamerlane died, the power to rule passed to his sons and grandsons. Ulugh Beg was the grandson who got Samarkand along with some territories surrounding it. He had been ruling the city for 40 years.

Ulugh Beg was known as a peaceful man who took a very small part in aggressive and invasive campaigns. He frequently visited other countries but it was just for the purpose of studying their culture, traditions, and trade. He was a talented scientist – a great mathematician and astronomer – who gathered scientists from different parts of the planet to work with him on his researches, which eventually resulted in compiling a star catalog, one of the greatest in entire human history.

In the 14th and 15th centuries, Samarkand was truly blossoming. It’s fair to say that it was going through its golden age, existing behind strong walls that protected the city’s gardens and parks. Most of the buildings, monuments, and other architectural objects that were constructed then are the primary urban tourist attractions today. And what had been built under the rule of the Timurid dynasty is equal to the masterpieces of ancient Egypt, India, Rome, China, or Greece in terms of cultural importance and historical heritage.

Now, similar to most cities in the world, Samarkand is divided into new and old districts. The new part of the city looks rather modern. There are cultural, industrial, and educational establishments in the area. The old neighborhoods have much to show you too. But it’s not only monuments of historical value, but it’s also old private houses and little shops.

You can go for one of the tours that will show you around the old districts of Samarkand. You will see that the city’s current population is around 500,000 people, but it is a cosmopolitan city with over 100 nationalities represented. Besides, Samarkand is one of Uzbekistan’s biggest cities, second to Tashkent.

For many centuries, this city has been full of life. Some of the greatest scientific discoveries as well as some brilliant poetry lines have been made right there. And it all happened with beautiful architecture and natural beauty in the background. Everyone who comes to Samarkand for the first time will be impressed by numerous historical layers overlapping there.

More than once, the city had to revive after the most severe adversities to restore its true splendor. Owing to the famous people of Samarkand, its sons, and daughters, the city has become the heart of economic and social life, science and art, the intersection of old and new.