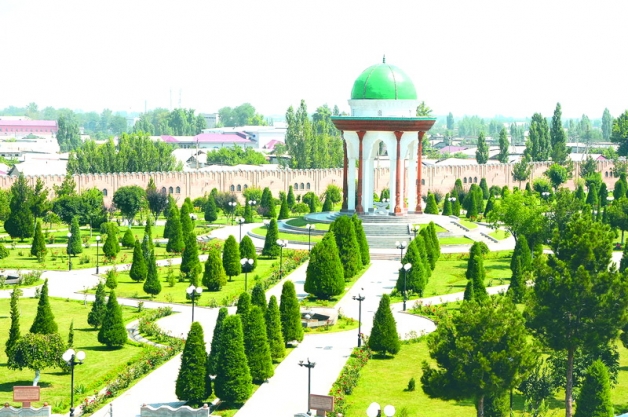 Margilan is the silk capital of the East, located 15 kilometers north of Fergana and Kokand. In 2007, it celebrated its 2000th anniversary, so it is an old city indeed. According to some archaeological researches, some types of agriculture existed on its territory already in the 13th century BC.

According to the legends, the name of the city is associated with Alexander the Great. Margilan comes from the word “Murginan”, which is a dish that Alexander was once offered during his stay in the city. The dish was pretty simple – chicken and bread – but Alexander found it very tasty and so he gave the name “Murginan” to the entire area.

There is another assumption as to how this name appeared. Some historians believe that “marg” is a word of the Sogdian language translated as “meadow” or “grassland”. Since there used to be an oasis, located where modern Margilan lies, it’s not surprising that the city’s name derived this way. Also, the word “marg” is still preserved in Tajik and means “land”.

The town was mentioned first in the Arab chronicles dating to the 10th century. During the Karakhanids’ rule, the city had been the capital of the Fergana Valley. Margilan or Margelan later became famous as the capital of silk. Different types of silk valued in the East ad all around the world are being made there. The city is also known for its fruit orchards as well as sweet pomegranates and apricots production.

Margilan was situated along the Silk Road. Therefore, the silk produced there was exported to Iran, Egypt, Greece, and Europe. Healers used to wrap up their patients in silk fabric for their faster recovery. European rich folks wore silk clothes as this was believed to be a means of protection from parasites. By the way, not only silk but also horses and jewelry were exported too. Margilan Uzbekistan is the city where trading has always been one of the most prosperous activities as it is now too.

Margilan silk factory was built in 1927. Silk production at the factory is still done completely manually, from the cocoon unwinding to the weaving. The patterns are painted using natural dyes received from onion peel, indigo, pomegranate and walnuts peel, herbs, and different plant roots. The equipment there is more than 80 years old and is made the same as the equipment used for silk making in ancient times.

Speaking of textile, national male and female costumes typical of the Ferghana Valley inhabitants and particularly Margilans are rather interesting and unusual. These include the kuylak dresses, yaktak shirts, robes, rumol headscarves, kiyikcha waist scarves, etc.

Up to these days, Margilan remains a place where many architectural and historical monuments are preserved. Here are some of them:

The Pir Siddiq is a mosque and a minaret both built in the 18th century. With time, the architectural ensemble developed. Today it consists of a mosque, a minaret, a courtyard with a crypt, and a dovecote. That’s why another popular name of the complex is “Kaptarlik”, which means “dove”.

In the courtyard, there is a mausoleum where saint Pir Siddiq is allegedly buried. Locals have a legend disclosing how the name of the complex appeared. It says that one day Pir Siddiq was hiding from infidels and found shelter in a cave nearby. The doves following him made their nests thus immuring the entrance. When the pursuers approached the cave, they didn’t even think of someone hiding inside because the birds were too peaceful sitting in their nests. So, they passed by, and the saint was saved. Saved by doves. Therefore, Margilans honor the saint and the birds even now, every time they pronounce the name of this architectural complex.

The single-chamber rectangular mausoleum of Khodja Maggiz was built in the 18th century. Its architecture oddly combines faceted and rounded shapes. There is a secret inside – the rectangular design hides an octagonal room with lancet niches.

The Madrasah is a square yard with an asymmetric mosque and iwan built in the 19th century. The mosque’s construction is not typical of the architectural style of those years as the ceiling has no vertical supports at all.

This structure was designed in a simple and unpretentious style. It is located near the city’s main bazaar so that local traders and buyers could have some rest there.

When traveling to Margilan, don’t forget to reserve some time for a simple walk along its streets. Talented local artisans and craftsmen selling their masterpieces on the streets look very harmonious with the religious and historical buildings in the background.