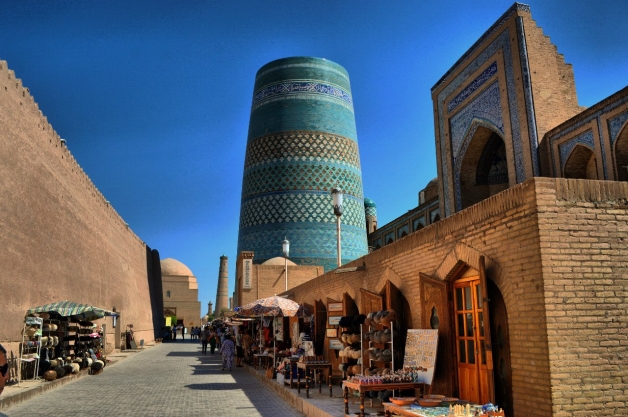 While traveling, we are not looking for shopping centers or skyscrapers. We long to dive into a foreign, strange, unexplored culture. We want to witness the outstanding architecture and weird-looking buildings, to taste new dishes, and to see completely different people. The Khiva city is able to satisfy all of those desires.

Khiva Throughout the Centuries

Ancient Khiva is sited in the Khorezm region of Uzbekistan, 30 kilometers away from its regional center Urgench in the Amu-Darya’s lower reaches. Khiva is a unique open-air museum, the main pearl of the Khorezm oasis surrounded by the deserts, which stretches along the left strand of the Amu-Darya. For several centuries, Khiva was one of the major centers of the well-known caravan pathway called the Silk Road.

Khiva history takes us thousands of years back. The city started its existence thanks to the Amu-Darya and the oases located along the left strand of the river. It was a perfect place to stop during the long caravan journey between the East and Europe. According to archaeological studies, the first settlement in that place was found almost 2,500 years ago. As the legend says, the city was built around the Kheyvak well, the water in which was said to taste amazing. The well was dug out by Sim, who was one of the sons of biblical Noah. You can see this well in the internal town of Khiva, Ichan-Kala.

In V-VI centuries Khiva became a significant settlement. Over time, it became not just a place of rest for the caravans but also an essential cultural and commercial center. After 1598, when the Amu-Darya altered its direction and left the old Khorezm capital city Urgench without water, Khiva became a new capital of the highly developed and powerful Khorezm state. The city is perfectly preserved to this day, presenting to us many exceptional monuments of the distant and mysterious past.

What You Will See in Khiva

When it comes to the city of Khiva photos aren’t enough. You need to personally see all the historical sights in order to feel that special oriental atmosphere.

The ancient inner city of Khiva is declared a part of the UNESCO World Heritage. It is called Ichan-Kala and is enclosed by mighty walls. The Old Town is very small, so half of the day would probably be enough to explore it. After visiting Khiva, you can easily imagine how other cities of Central Asia looked many years ago.

You can enter the Old Town through one of the four gates. Palvan Darwaza, or the Eastern Gates, were built in 1804-1806 and were called “Slave Gates” because local slave traders used them at that time.

Among all the structures of ancient Khiva, the Kalta-Minar minaret attracts the most attention. Its beautiful glazed tiles and fantastic majolica show the talent of the skillful Uzbek artists. Kalta-Minar is translated as “short”. Initially, it was expected to become the highest minaret in the East. But after Muhammad Amin Khan’s death in 1855, the construction ceased at the height of 29 meters. The reasons for ending the construction, of course, are covered with mystery and legends. But the fact remains – the largest minaret of the East remains unfinished.

One of the main attractions in Khiva is its locals – people who have been living here for more than one generation, who love their land and, above all, protect the legacy of their ancestors. Their houses are always welcoming, and their smiles are warm. They live in the heart of their family’s history. Just like their ancestors, they greet travelers with a smile and an open heart.

People in Khiva are extremely talented. Every tourist who comes here can buy souvenirs related to the following arts and crafts:

While walking the streets of Khiva, you catch yourself thinking that modern civilization is very far away with all its haste and noise. But here, in the heart of a calm and peaceful atmosphere, you can truly have rest for both your body and soul.