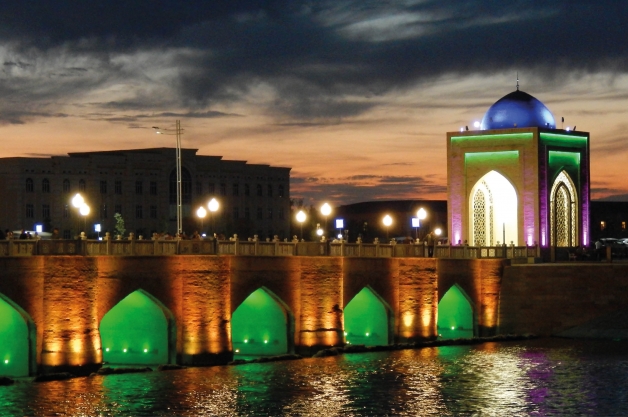 Qarshi – the City of Many Attractions

If you ever consider a trip to Uzbekistan, there is one place that will grant you the feeling of ancient oriental tales. Surrounded by picturesque mountains and cotton fields, Qarshi city is located about 520 km away from Tashkent in the south-southwest direction. Thanks to its location in a fertile oasis, Qarshi has turned into one of the major economic, trading, and agricultural sites in Uzbekistan.

Nowadays, Qarshi is well-known for the large Shurtan natural gas fields located around the area and the military airport Khanabad temporary used by NATO military forces. However, only some of us know that Qarshi is actually one of the world’s most ancient cities, with the history dating back so far to BC times. In fact, the age of the city is more than 2700 years.

Qarshi Uzbekistan was originally known as the Sogdian city of Nakhshab, the Islamic Uzbek city of Nasaf, and the major city of the Bukhara Emirate. The modern name Karshi or Qarshi originates from the twin palaces, which were built by the Mongols Chagatai Khans Kabak and Kazan in the 1320s. “Qarshi” used to mean fort in the Mongolian language.

According to UNESCO archeological researches, the territory of the modern city Qarshi was inhabited by ancient settlements already in the 7th century BC. Being located on the Great Silk Road, going from Central Asia to India and Afghanistan, the city was a place of great interest for many invaders, including Alexander the Great.

Contemporary Qarshi is an administrative center of Qashqadaryo region in Uzbekistan. The town is inhabited by almost 300.000 people. Over the last decade, Qarshi has changed significantly: new administrative buildings, recreational zones, educational institutions, sports complexes, etc. appeared there. So, the local infrastructure keeps growing by strengthening its tourist potential as the next step for its further development.

Thanks to the irrigation project transferring water from Turkmenistan to Uzbekistan, the area surrounding the city is now planted with various cotton crops. Thus, the industries of processing agricultural raw materials and producing the pileless carpets allow transforming the city and its surroundings into a valuable national resource.

Qarshi, which keeps preserving its historical and cultural traditions, remains attractive to many scientists and history enthusiasts. The ancient city boasts numerous sophisticated monuments, which combine different cultures and traditions.

The seven-arched bridge over the Kashkadarya River is one of those unique historic attractions, which should be observed in Qarshi. Being built in the 16th century, the bridge reaches almost 120 meters in length, 8 meters in width, and 5 meters in height above the river.

Sardoba is another interesting construction that was used for keeping water in this dry region. By the way, the local people were trying to find alternative methods for keeping water, so they were digging wells such as a 97 meters deep well located in the village Kamuk, on the border of the Qarshi steppe.

The Regional Museum, located not far from the busy market square Khoja Abdul Aziz Madrassah, has become a must-see for everyone who is visiting the city for the first time. The right part of the museum is stuffed with numerous black-and-white photographs depicting Soviet history, while the left part demonstrates some exhibits that refer to the times of the Bukhara Emirate.

These are some other touristic attractions, which are worthy of your attention during your stay in Qarshi:

Qarshi is probably not the most beautiful city in Uzbekistan but its historic attractions will not leave you indifferent. Thus, your travel to Qarshi will never be devoid of a certain historic mystery thanks to a variety of landscapes and bewitching relics of the past.