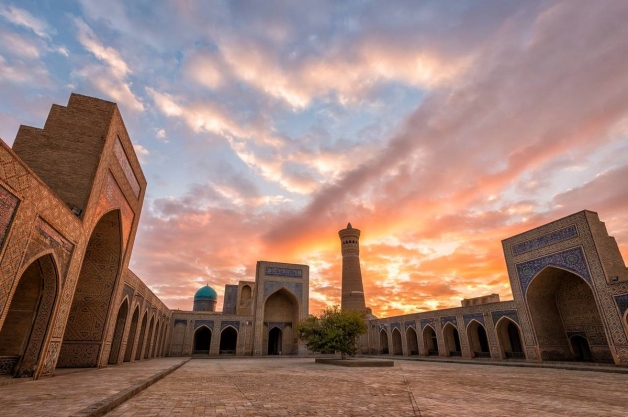 Persian prince Siyavush, who built a citadel here shortly after marrying the daughter of Afrosiab in Samarkand, is the traditional founder of Bukhara city, but its growth has for centuries depended largely upon its strategic location on the crossroads to Merv, Gurganj, Herat, Kabul, and Samarkand.

The early town was taken by the Persian Achaemenids in the sixth century BC, by Alexander the Great in 329 BC and by the empires of the Hephalite and the Kushan. In Sogdian times the town was known as Numijent and later renamed after the Sanskrit word for the monastery, vihara. A major city in the Sogdian confederation, it remained a younger brother to the thriving merchant towns of  Paikend, Romitan, and Varakhsha (home to the ruling dynasty of Bukhar Khudats), until the storm of Islam arose.

The Arab invasion of Bukhara

After the fall of Merv (641) and Paikend (672), Bukhara managed to keep the Arab fighting machine at bay with an annual tribute. Relations grew strained when 80 Bukharan hostages were abducted to Medina, only to rebel en route and commit mass suicide. But Bukhara city was left largely unmolested until the fire-worshipping city was taken by Qutaiba in 709 in the first leg of his jihad against the lands beyond the Oxus. Three times the city was taken and three times the city rebelled, but ruling Queen Khatum finally fled the city, leaving behind a slipper worth 200,000 dihrem, and the city was taken.

The Arabs were assiduous in their Islamification of the town. Whole districts of the city’s population were evicted to make room for Arab troops and an Arab soldier was posted in every household. Non-Arabs were conscripted into the ruling elite and Qutaiba offered two dihrem as an incentive to attend the makeshift Friday mosque. Islam flourished, grafted onto existing beliefs.
Revolts persisted whenever the Arabs turned their backs and terrible punitive campaigns were regularly unleashed, but the roots of Islam took hold and the essence of the city was transformed.

By the late ninth century, internal dissent in the heart of the Ummayad Arab Empire had translated into a weakening of power on its fringes. The local Iranian governors broke with the caliphate and, after a fratricidal struggle between Bukhara and Samarkand, Ismael ibn Ahmed founded the Samanid dynasty and ushered in a golden age whose commercial and cultural vitality soon attracted the finest intellectuals of the time. Ismael and his dynasty ruled as ideal Muslim rulers, offering patronage to the most talented men of letters in the land. Ibn-Sina, al-Beruni, the historian Narshaki and poet Rudaki all served to turn Bukhara into the center of a Persian renaissance and of Islamic science. Persian poetry fused with court Arabic as Bukhara’s library expanded to become the most famous in the Islamic world. Irrigation networks were expanded and rapid urbanization swelled the population to over 300,000, larger indeed than the soviet city. Bukhara city became “embellished with the rarest of high attainments … the meeting place of the highest intellectuals of the age, the horizon of the literary stars of the world”.

By the 11th century, the urban Persian yielded to the nomadic Turkmen. In 999 the Samanids fell to the Karakhanids, the Karakhitai in 1141 and Khorezmshah in 1206. The Chashma Ayub, Kalon Minaret and Namazgokh Mosque were all added to the city, but in general, it was a period of decline and uncertainty.

The Mongol invasion of Bukhara

In March 1220 the Mongol tide of calamity was spotted outside Bukhara’s gates, its troops more numerous than locusts, each detachment like a billowing sea. Thirty thousand defensive troops sped to meet them and were slaughtered to a man. “From the reflection of the sun, the plain seemed to be a tray filled with blood.” Their leader Genghis Khan, The Wind of God’s Omnipotence, rode to the Namazgokh Mosque and proclaimed himself the Scourge of God. “If you had not committed great sins,” he said, “God would not have sent a punishment like me”. The citadel was taken, the city put to the torch and razed to a level plain. No man was spared who stood higher than the butt of a whip. Soon cartloads of booty and trains of slaves were seen snaking away from the charred remains of the holy town, to be employed as human shields in the forthcoming assault on Samarkand. A refugee who finally managed to escape to Khorasan said of the massacre: “They came, they sapped, they burnt, they slew, they plundered and they departed.”

The city took a century to recover from the trauma, at which point it was taken, destroyed and depopulated by the Persian Khan Abaqa II. By 1366 ibn-Battuta recorded that “all but a few of its mosques, academies, and bazaars are lying in ruins”. The once holy city Bukhara had a “reputation for fanaticism, falsehood, and denial of the truth”. The town glimmered again under the Timurids but was never more than a faint shadow of Tamerlane’s capital at Samarkand.

In 1500 the Uzbek clan leader Mohammed Shaybani Khan entered Bukhara and murdered its ruler Ali, thus supplanting the squabbling Timurid line with his Uzbek dynasty. The Timurids rallied briefly under the return of Babur to Bukhara in 1511, but on 12 December 1512 Babur and his Shi’ite Persian allies were routed in the pivotal battle of Gijduvan and the Timurid leader fled Transoxiana for ever. The Uzbeks were undisputed champions of Transoxiana and Bukhara was its capital again, with the Oxus a fragile border with Shi’ite Safavid Persia. Abdullah Khan reunited the Uzbek clans with a reign of ruthless public order that ended decades of anarchy. Abdullah’s reign prepared the ground for Bukhara’s second golden age and his name grew to near-legendary proportions. Craftsmen abducted from conquered Herat fuelled a flowering of decorative and miniature art. The city began to take its present shape under a program of religious and secular construction, spurred on by a rising trade with Russia. The clergy and the khan’s spiritual adviser, the Sheikh al-Islam, grew in power, while Bukhara swelled to boast 150 madrassahs and 200 district mosques.

In 1558 Anthony Jenkinson, the first Englishman to stagger into Central Asia spent two and a half months in Bukhara in his search for new markets and a route to Cathay. His journey was unsuccessful, but he managed to teach Abdullah how to shoot a gun, a kindness the khan repayed by absconding to Samarkand owing Jenkinson money for nineteen bolts of cloth—the only merchandise he managed to sell during his stay.

After Russia annexed Astrakhan in 1552, the Mongol leader Yar Mohammed and his son Jan fled to Bukhara to found a new Uzbek family dynasty, the Janids or Astrakhanids, who ruled for the next 150 years. As overland, continental trade routes withered, and wars with Shi’ite Persia intensified Sunni Bukhara’s religious isolation, the khanate sank into obscure barbarism, economic stagnation, and religious fanaticism. There were brief recoveries under Imam Kuli Khan and Abdul Aziz Khan, but even a change of dynasty to the Mangit in 1785 could do nothing to halt Bukhara’s decline from an international to a regional player.