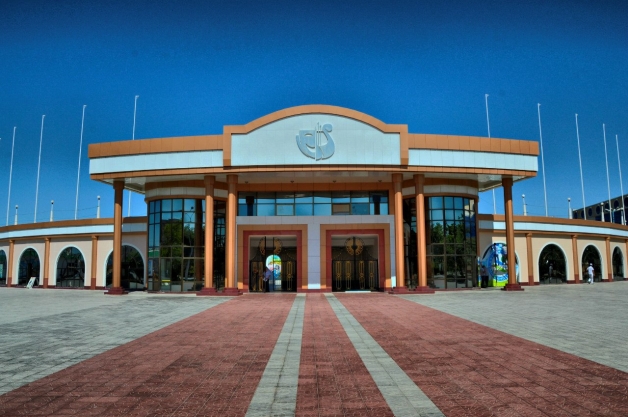 The Young Heart of Karakalpakstan Republic

Surrounded by three deserts, the Uzbek city Nukus (Nokis in Karakalpak) is situated on the north of Uzbekistan. The city is the capital of the autonomous Republic of Karakalpakstan, which is the most extensive in the territory and the most thinly populated region in Uzbekistan (the density of population here is only 10 people per square km).

Nukus is the sixth-largest city in the country, but someone may tell you this is the least appealing destination among tourists. Don’t believe them! This city has an ace in the hole.

Developing and Attractive for Travelers

Nukus is a Soviet creation, and some may find it not that beautiful as other big Uzbek cities. Still, after Karakalpakstan achieved independence, the city turned into a developed administrative center with well-established infrastructure. There are some remarkable sights in the city that attract travelers from all over the world and make them come here on their tour to Uzbekistan.

First, tourists go to Nukus to visit the famous State Art Museum named after I.V. Savitsky, which represents one of the best collections of the Soviet-era art. Second, the city is a host to the State Museum where you can see the endangered species of flora and fauna of the Aral Sea. Nature enthusiasts will surely like this place. Those looking for some amazing adventures can take a trip to deserts and ride a camel there.

Although Nukus has recently celebrated its 80th birthday, the history of this place extends throughout millenniums. This region has a few archaeological and historical sites. Before our days, the settlement Shurcha existed there, in which people had been living since IV century BC. After some time, the settlement transformed into an urban-type settlement.

Being under the rule of the Soviet Union, Nukus has got an architectural footprint of this era.

Nowadays Nukus is a peculiar Uzbek city, in which you will be able to see a real-life of average Uzbeks and their actual lifestyle. National coloring and culture in everyday routine are not very noticeable there, and, of course, the locals don’t wear national costumes when going to the supermarket. However, you can find lots of authentic attributes in the souvenir shops. Start with getting one of those Uzbek folk hats – skullcaps!

Talking with the local people, a tourist will definitely admit a different mindset and special features of communication. With that, Nukus people are really welcoming and hospitable towards international guests. Besides, the city is inhabited by a mixture of cultures, which cannot but please a traveler who would like to get acquainted with a variety of oriental nations.

From the architectural side, Nukus today is composed of new buildings on the main streets of the city and old ones left over from the Soviet Union period. If you are looking for a getaway from the big city hassle, Nukus is a perfect variant. There are no sky-scrapers and actually almost no buildings higher than 5 floors. This will give you a feeling of simplicity and authenticity.

Nukus can offer you some really nice and cozy hotels with a fine interior design, where you can stopover. Thanks to a developed transportation network, every tourist can easily get to any sight and just conveniently move around the pleasant places in the city.

To sum up, being in Nukus, you can visit some interesting places, such as:

Since the Karakalpak region is famous for its arts and crafts, artistic appliqués, and embroidery, a carpet will be a good reminder about your trip there. So, you can buy something with Uzbek national patterns and ornaments as a nice-looking souvenir.

Don’t miss a chance to enjoy the warm hospitality, listen to ancient beliefs, and walk through oriental bazaars in Nukus where it is always sunny!